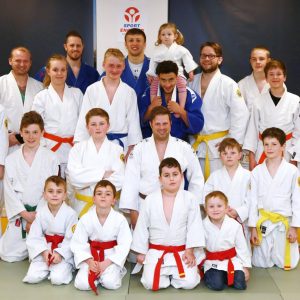 TWO judo stars passed on the secret of their success when they staged master classes in Bournemouth.

Ashley McKenzie and Frazer Chamberlain were guests of the Nokemono Judokwai club which meets at the Sir David English Sports Centre.

The pair, who were members of the Team GB squad to the 2015 European Games, ran separate master classes for adults and children as part of their ‘Road to Rio’ campaign.

Ashley was a London 2012 Olympian and 2014 Commonwealth champion while Frazer has won two European Cup medals, including silver at the 2014 German European Cup.

Ellis Jones Solicitors funded the masterclasses with a £400 donation. Matt Clake, a partner in the law firm, is on the Nokemono Judokwai committee and his son has been a club member since 2014.

He added: “Ellis Jones was delighted to support such an inspiring event and we wish Ashley and Frazer every success in their bid to represent Great Britain at Rio 2016.”

Nokemono Judokwai club was founded in 2006 and has about 200 active participants.

Three years ago the club Nokemono Judokwai was awarded the Queens Award for Voluntary Service.

The award, which has the equivalent status for voluntary groups as the MBE has for individuals, recognises outstanding contributions made to local communities by groups of volunteers.

The names of the Team GB judo squad for Rio 2016 will be announced on June 16.