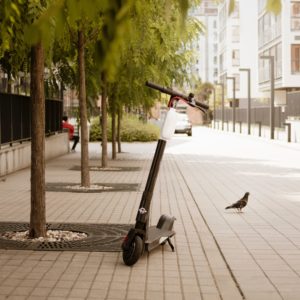 Electric scooters are two-wheeled scooters with small, electric motors to power them. They have become increasingly popular in many European cities and in the US. They have exploded in popularity since scooter-sharing schemes took off in about 2017 and are now available in more than 100 cities across the world.

Cities including San Francisco, Paris and Copenhagen have piloted a scheme to let people hire an electric scooter in a way similar to city bicycle hire.

Where can I ride an E-scooter in the UK?

Unlike city bicycle hire, riding an electric scooter on the road is forbidden in the UK at present. Nor are they allowed on the pavement. Many people are unaware that the only place they can be ridden is on private land, with the permission of the landowner.

What happens if I’m caught riding an E-scooter illegally?

Last month almost 100 people were caught riding electric scooters in London as the Metropolitan Police staged its first operation targeting the machines. Ten people were fined and had their scooters confiscated due to speeding or ignoring a red light.

The crackdown comes following the tragic death of TV presenter and YouTuber, Emily Hartridge. The 35-year-old was struck by a lorry in Battersea on July 12, making her the first person in the UK to be killed while riding an e-scooter. The Associated Press reports that, since January 2018, at least 11 electric scooter riders have died in road traffic accidents.

The UK laws around scooter use are struggling to keep up with their growing popularity, currently companies are not required to provide key safety features and some scooters only have one brake, which makes stopping safely more difficult.

Transport minister Michael Ellis said: “We are examining whether they can be used safely on the road – and if so, how that should be regulated to ensure the public’s safety. However, companies must understand that reviewing laws does not necessarily mean laws will change.”

“People who use e-scooters need to be aware it is currently illegal to ride them on the pavement and the road.”

If you have been injured in an accident caused by an e-scooter and are looking to make a claim please call our experienced team of solicitors on 01202 525333 for free specialist consultation.