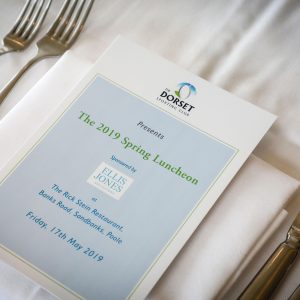 We were delighted to have been given the opportunity to sponsor the Dorset Sporting Club Luncheon on Friday 17th May. The event was held by The Southern Sporting Clubs, taking place at the prestigious Rick Stein Restaurant in Poole.

The event was a fantastic opportunity to network with other businesses and individuals, as well as hearing from the event speakers. During the lunch the audience were able to hear from both Dominic Woodward and Matt Dawson MBE.

Dominic Woodward, comedian and actor based in Manchester, has performed in most of the comedy clubs across the country. Dominic specialises in tailoring his shows to the audience, for corporate events or whilst dining, and was thoroughly entertaining throughout the luncheon.

The audience also had the pleasure of hearing from Matt Dawson MBE. Following his retirement from being an English rugby union player Matt made many public appearances on television shows such as BBC Celebrity MasterChef, Strictly Come Dancing and A Question of Sport. Matt gave a superb talk at the luncheon and was a very entertaining raconteur.

The Southern Sporting Clubs hold a number of business dining events throughout the country, featuring sporting celebrities, professional guest speakers and entertainers. Attending their multitude of events allows for regular networking with like-minded business people and to be entertained by some of the most renowned sports personalities.

We would like to thank Dorset Sporting Clubs for presenting Ellis Jones Solicitors with the opportunity to sponsor this event, and we thoroughly look forward to attending the next one.

For more information on our sponsorships and partnerships, please click here.